Doctrine of the Skull: Phrenology and Popular Knowledge in Antebellum America 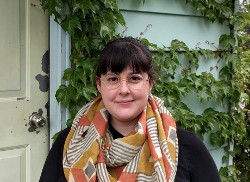 Kathrinne Duffy is a 2017-2018 Research Fellow and is a Ph.D. Candidate in American Studies at Brown University.

“It is now my desire and determination, to afford every possible facility for the spread of Phrenology among all classes; and in my way, by cheap publications, private lectures, supplying societies with libraries and specimens, &c. &c….” So O.S. Fowler, America’s best-known phrenologist, described his project in 1843.  For my dissertation, “Doctrine of the Skull: Phrenology and Popular Knowledge in Antebellum America,” I am researching the world of practical phrenologists and their audiences, with an emphasis on Fowlers & Wells, a New-York-based phrenological business firm. Phrenology had a major influence on nineteenth-century American culture, in part due to its consumer-oriented nature. Itinerant lecturers cultivated a conversational tone and invited audience participation. Publishers heralded the cheapness of their books and pamphlets, boasting of their accessibility to “the million.” Cranial examiners offered customers practical advice regarding work, marriage, and health. The meaning of the science shifted in relation to its audience, as phrenologists constantly adapted their message to appeal to a wide range of people.  Phrenology illuminates the workings of the popular knowledge economy, one corner of the antebellum trade in ideas.
With a research fellowship from the Consortium for History of Science, Technology, and Medicine, I visited three institutions: the Smithsonian, the American Philosophical Society, and the Thomas Fisher Rare Book Library at the University of Toronto.  Archivists and curators at each location helped me to identify a wealth of useful materials: broadside advertisements, phrenological character charts, rare books and pamphlets, manuscripts, and museum objects.  Below I’ll highlight a few sources that I found particularly interesting.
The Smithsonian National Museum of American History (NMAH) houses the papers and objects of Charles Came (1806-1881), a scientific showman who dabbled in phrenology. Came started out as a furniture-maker in rural upstate New York. In the 1840s, he began traveling around the countryside, offering demonstrations of electricity and astronomy with his “splendid golden apparatus.” This apparatus came to include magic lanterns, induction coils, Leyden jars, a dip needle, an orrery, a tellurian, mechanical organs, and many other devices which now reside in NMAH storage. Aside from the apparatus itself, the museum preserves a range of Came’s belongings, with items ranging from packing cases to a foot warmer. The letters he wrote home to his family provide context for the objects, describing his life on the road. Came had an eclectic repertoire, sometimes practicing medicine or offering his services as a clairvoyant. He faced challenges: attractions that were not as lucrative as he had hoped and the struggle of hauling his equipment along muddy paths. Overall the Came collection offers a tangible and vivid sense of how scientific lecturers operated, appealed to their audiences, and cultivated adaptability.
At the American Philosophical Society (APS) I examined the papers of Samuel George Morton (1799-1851) and his book Crania Americana (1839). Morton, a Philadelphia physician and ethnologist, collected and measured human skulls.  He suggested that races of humanity could be ranked by intellect according to skull size, with Caucasians forever at the top – a view embraced by proponents of slavery. While Morton’s craniology had points of overlap with phrenology, there were significant differences. For instance, phrenologists tended to believe that cranial morphology could evolve, and their work found favor in anti-slavery circles.  But beyond the conceptual contrasts between these two fields, I was struck by the divergent approaches that Morton and the Fowlers took to disseminate their ideas. Crania Americana was a lavish production: folio-sized, with generous margins and many detailed lithographs. Copies sold for $20, a substantial sum. Compare this to an 1845 list of Fowlers & Wells book prices: most of their publications cost between twelve and a half cents and one dollar.  The radically different pricing schemes indicate different intended audiences and business models. Morton’s book had a limited distribution, reaching colleagues in Morton’s scientific network, individuals who could afford it, and institutions. (The copy I saw had a handwritten note: “American Philosophical Society from author 20 Dec 1839.”) By contrast, Fowlers & Wells set prices low and aimed for a mass readership. As I also learned, Morton seems to have known Orson Squire Fowler – perhaps unsurprisingly, as both men lived in Philadelphia in the late 1830s.  There are hints in the Morton papers that Fowler was not participating adequately in the network of skull-related scientific exchanges and courtesies. Two of Morton’s correspondents noted Fowler’s unreliability, with one expressing a great deal of frustration with him. Evidence of these personal interactions, along with the contrast in publishing modes, is useful as I chart the deviation of practical phrenologists from more genteel scientific communities.
At the University of Toronto I looked at a collection of phrenological busts. Phrenologists often designed busts as accompaniments to their published books. A novice could read about the various phrenological organs, then practice locating them on a three-dimensional, marked plaster head. UT holds a bust labeled with an advertisement for the American Institute of Phrenology. This organization – which had close ties to the Fowlers & Wells firm – incorporated in 1866 in part as a credentialing entity for practical phrenologists. The Institute provided courses of instruction, with graduates receiving diplomas. As noted in its charter, the founders hoped to produce “competent teachers and lecturers” who would “displace the ignorant self-styled ‘Professors,’ who only disgrace the science.” Like their counterparts in the medical field, leading practical phrenologists were attempting to limit entry into their profession. But the move toward professional gatekeeping contradicted the antebellum ethos of Fowlers & Wells, which had been to convert as many people as possible to phrenology, then sell them the inexpensive supplies they needed to practice the science themselves – tools like plaster busts. UT’s bust with its American Phrenological Institute label embodies contradictory impulses toward popularization and exclusivity.
Thank you to the Consortium and to collections staff at the three institutions for making this research possible.  I’m grateful to have had the opportunity to visit these archives and experience the warm collegiality of the Consortium community.