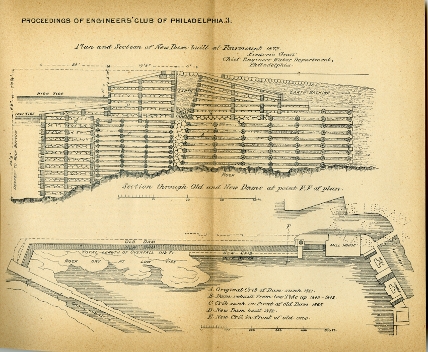 Illustration from Proceedings of the Engineers’ Club of Philadelphia, August 1886 In the late 19th century, Philadelphia was growing politically, socially, and economically. Several large-scale projects, such as the building of city hall and the westward expansion of the city, called for dozen of city planners and engineers to work together toward their completion. Despite this, at the Centennial Exhibition of 1876, where numerous engineers congregated to view the latest scientific advances, word spread that Philadelphia engineers did not seem to know each other. This notion stuck with Charles E. Billin, an engineer who lived in west Philadelphia. In the winter of 1877, Billin hosted a gathering of local engineers at his home; thus began a series of social events at the homes of various engineers. With just over 20 members, the Engineers’ Club of Philadelphia was officially established at the home of Coleman Sellers Jr. on December 17, 1877. Among its founders were Charles A. Ashburner, George Burnham Jr., Lewis M. Haupt, and M. R. Muckle Jr. The club's objective was to improve the social relations between local engineers to promote the study and practice of engineering through meetings and the circulation and discussion of professional papers. The club's constitution and by-laws were adopted in January 1878, and Professor Lewis M. Haupt was named its first president. Regular meetings were held twice a month and the club met at various locales in its formative years. Internally, and mostly during its early years, members focused on reading and discussing each other’s unpublished and published papers. The club also published its meeting proceedings and newsletters Engineers and Engineering and the Announcer. In addition, the club held dinners and receptions, kept its members informed of engineering-related events and conventions, and played host to other engineering societies. The club's members also had access to their own library that included bound volumes, pamphlets, maps, and drawings on subjects ranging from architecture and buildings materials to railroads and mining. At various points during its history, the club also formed its own orchestra, glee club, and lecture circuit, and provided opportunities for field trips both locally. The Engineers’ Club of Philadelphia (engrclub.org) currently resides at 216 South 16th Street. It continues to provide professional development and hold special events for engineers and those interested in the field of engineering. The Engineers’ Club of Philadelphia records span from the late 19th century to the late 20th century and are housed in 59 boxes and 32 volumes. For the most part, the records document the club's history and general operations through meeting minutes, committee papers, and membership files. Beyond its service as club documentation, the collection could also be used to trace the engineering profession and engineering projects in Philadelphia and Pennsylvania over the course of the 20th century. A complete finding aid for the collection can be accessed here.