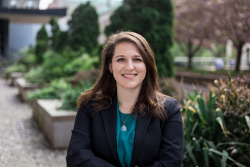 Jordan Katz is a 2018-2019 Dissertation Fellow and Ph.D. Candidate in the Department of History, Columbia University.

Employed as midwives, wise women, or healers, female medical practitioners of various faiths disseminated medical knowledge and supplied information pertinent to religious and legal rulings in early modern Europe. While scholars have noted this role for Christian women, they have not studied the unique position of female Jewish healers with regard to municipal regulations, communal politics, medical knowledge, and legal consultations. My dissertation, “Jewish Midwives, Medicine and the Boundaries of Knowledge in Early Modern Europe, 1650-1800,” examines the role and influence of Jewish midwives in early modern Europe, addressing their interactions with communal leaders, physicians, Christian medical practitioners, and bureaucrats. Exploring their medical influences, their engagement with administrative knowledge systems, and their intellectual status in the eyes of prominent male leaders, my work reconsiders structures of knowledge and authority in seventeenth- and eighteenth-century Europe.

Jewish midwives have frequently been omitted from studies of early modern medical women, despite their clear presence in a diverse array of archival and print sources. Similarly, within Jewish history, gender has often been treated as a special interest, without recognition that attention to gender helps bring all topics into greater focus. My work harnesses municipal and communal records, as well as rabbinic judgments, personal manuscripts, and midwifery treatises, to demonstrate how gender influenced the opportunities for midwives to engage in knowledge production and transmission, allowing them to gain expertise in arenas that were frequently cordoned off from men. My study shows that Jewish midwives, too, became part of an international system of scientific communication, whose content flowed between vernacular and elite practitioners.

One of the challenges of working on this topic is that early modern Jewish midwives wrote little themselves, making it difficult to develop a complete picture of their education and training. As part of my initial research for this project, I discovered a 1709 Yiddish manuscript translation of a printed Dutch midwifery treatise. The Yiddish work, translated from an obscure Dutch handbook for a Jewish midwife in Amsterdam (Samuel Janson’s Korte en Bondige Verhandeling van de Voortteeling en ’t Kinderbaren), offered a starting point for considering Jewish midwives’ acquisition of textual knowledge in Western Europe, as it represents the first concerted effort that we know of to present a midwifery text to Jewish women in a language that was accessible to them and, in fact, intended for them. During my time as a Dissertation Fellow at the Consortium for History of Science, Technology, and Medicine, I researched midwifery treatises in French, German, and Dutch that would offer a comparative lens for this text.

This work first took me to the New York Academy of Medicine, which holds a copy of the printed Dutch treatise from which the Yiddish manuscript was translated. By seeing Janson’s original Dutch work and noting how it differed from the Yiddish translation, I was able to gain significant insight into the role of translators in mediating scientific knowledge. Translators frequently shortened the texts that they were given, as was the case here, where the Yiddish translator did not translate the entirety of the work from start to finish, but only the parts he deemed necessary and relevant to his client. Likewise, I discovered that while the Dutch version contains several vivid images and diagrams, these are omitted from the Yiddish translation, suggesting that the translator was a figure who actively curated the text and shaped it into something that resembled yet diverged from the original.

At NYAM, I also examined several contemporaneous German midwifery handbooks in order to gain a sense of midwives’ education at the time, and to draw from broad trends about midwifery to understand where Jewish midwives fit within this picture. These included works Johann Christoph Ettner and Johan von Hoorn, as well as one of the few works written by a midwife, herself: Justine Siegemund’s Die Chur- Brandenburgische Hoff- Wehe-Mutter (1690). Siegemund’s work does not intend to be a case record or broad tome, but rather a pedagogical manual structured as a dialogue between two midwives, which presents information in a systematic question-and-answer format in order to educate new midwives.

At the College of Physicians of Philadelphia, I continued this comparative work by examining Louise Bourgeois’ Observations diverses, sur la sterilité, perte de fruict, foecondité, accouchements, et maladies des femmes, et enfants nouveaux naiz (1609). Unquestionably the most well-known early modern midwife, famous for having served as midwife to the queen of France, Bourgeois was also one of the first midwives to record her memoirs and notes of practice. Her Observations diverses sheds light on the typical path of training for midwives in France, which involved apprenticeship and examination before a panel to gain licensure. Additionally, while at the College of Physicians of Philadelphia, I was able to see a German translation of Janson’s Korte en Bondige Verhandeling, and to look at Johann Georg Sommer’s Hebammen-Schul Oder gründlicher Unterricht (1693).

Support from the Consortium for History of Science, Technology and Medicine has greatly enhanced my project. My work has benefited from the sustained writing time offered by the Dissertation Fellowship, as well as the significant time in the archives that this fellowship afforded me. The study of midwifery engages crucial questions of healthcare and medical practice, many of which have their origin in the early modern period. Contemporary debates about women’s agency over their own bodies invariably lead to questions about whose knowledge is valued and who possesses authority in the setting of childbirth, making a study of early modern Jewish midwives particularly relevant in our current moment.