Of Mythical Families in Mythical Cities: Small Family Propaganda and the City in India, 1954-77 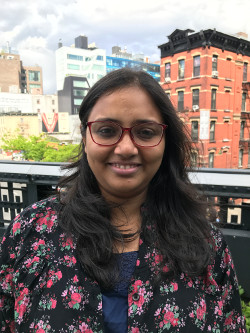 Aprajita Sarcar is a 2017-2018 Research Fellow and is a Ph.D. Candidate in the Department of History at Queen’s University.

In a booklet titled “The IUD Handbook,” the Population Council listed the various forms of intrauterine devices that were available in 1966.  It was meant for circulation amongst the Council staff members spread across the globe. The handbook was intended to inform the staff about the process of producing IUDs and the pharmaceutical companies that produced them. As a historical artefact, it tells its readers about the way IUDs functioned as family planning advocacy. Various assumptions guided the varied devices that could be help women gain control over the reproductive process. Many of the designs were aimed at being invisible to the men, so that they never come to know that their wives were using contraception. IUDs were embedded in the knowledge transfer circuits from the North to South and the recently decolonized world. Their circulation in the developing countries reflected the anxieties of the North of threat of communist expansion.  The developmental trajectory of IUDs, therefore, is embedded in cultural contexts of the 1960s and 70s.
The doctors who designed these devices often would sell them to specific pharmaceutical companies with the aim of global dissemination. The Population Council helped in the distribution of these devices in their country-level programs. The situation becomes complicated when the demand for these devices surpasses the rate of production. Since the rights to the design lay with specific corporate entities, it became hard to explain to developing countries why the devices could not be produced in their grounds, even though the natural resources for the devices like rubber, or wood or plastic were available in the countries. This licensing regime had a significant impact on the trajectories of the population control lobbies worldwide. In the situation where devices directed at women were scant, advocacy slowly shifted to contraceptive technologies (like condoms) and sterilizations aimed at men. However, the Council staff convinced themselves that the shift was happening because of the ambiguous nature of side-effects that the devices caused: the Dalkon Shield was the perfect illustration. The corporation that funded it eventually lost a class-action suit because of the irreparable damage that the device caused in women who used it.
I was able to unearth these facts and stories, because the Consortium of History of Science, Technology and Medicine kindly funded my travel to the Princeton University Library, Rockefeller Archive Center, and New York Academy of Medicine. I was able to gather material that was directly related to my thesis. My work traces the evolution of the modern, nuclear family in South Asia. All the archives listed here had primary material essential to my research. I am working on the emergence of the nuclear family as the modern unit of governance in postcolonial India (1954-77), with the supervision of Dr Ishita Pande. My work is at the interstices of histories of population control, developmental planning and urban histories.
My thesis investigates how transnational flow of information and medical technologies were informing local and national health programs around contraception. The local specificities also informed transnational policies, like in the case of leveraging the condom over the IUD. The conceptual binary of rural/urban influenced governance around family planning. While the nuclear family stood for all things modern, the ways by which couples were to attain this small family size, were ambiguous. For urban locales, families were encouraged to meet social workers, and later doctors who encouraged the couples to make informed decisions about using contraceptives. For the rural households, the state increasingly pushed monetary incentives and eventually, coercion. The years from 1950s-70s document this shift in language. Local and global power hierarchies were pushing for coercive population control mechanics, the idea of the nuclear family remained a myth that represented something more than just surgical contraception, and retained an imprint in popular culture.
At Princeton University, I accessed the private papers of key demographers like Dr. Frank Notestein, Dr. Ansley Coale and Dr. S. N. Agarwala. I went in hoping to find out about the relationship that American demographers shared with their Indian counter parts. I could identify several Indian scholars who were part of the Office of Population Research in Princeton University. I was also able to collect material on the global linkages that dictated the field of demography within the power bloc politics of the Cold War era.
At the Rockefeller Archives Center, I found material concerning research on Intra-Uterine Devices (IUDs) and other forms of contraceptive devices. The material not only spanned several decades and countries, it also opened my eyes to the role of the Population Council and Ford Foundation in their development. The research on IUDs was guided by factors like availability of raw materials, licensing regimes and intellectual property rights. The specific designs of various forms of IUDs were circulated across population clusters of the developing world that fit the demographic profile of the urban or rural poor.
At the New York Academy of Medicine, I found all the volumes of the Journal of Family Welfare and other publications from the now-redundant Central Family Planning Institute in New Delhi. I studied the content of the volumes spanning 1950s-70s. I found various patterns of knowledge dissemination around population control. The more dominant trend of the 1950s was to stress on the importance of counseling on birth spacing. By the end of the 1960s, this stress mutated into an incentivized advocacy wherein men and women of rural population clusters were targeted and encouraged to undergo surgeries for contraception and sterilizations. In the process, the family planning advocacy became more targeted towards the reproductive capacities of poor families in urban and rural landscapes. This form of advocacy ultimately transformed into coercive sterilizations in the 1970s. Studying the articles of the Journal of Family Welfare makes it possible to understand this change in advocacy, as it was published by the Family Planning Association of India. The organization was funded mainly by the International Planned Parenthood Foundation.