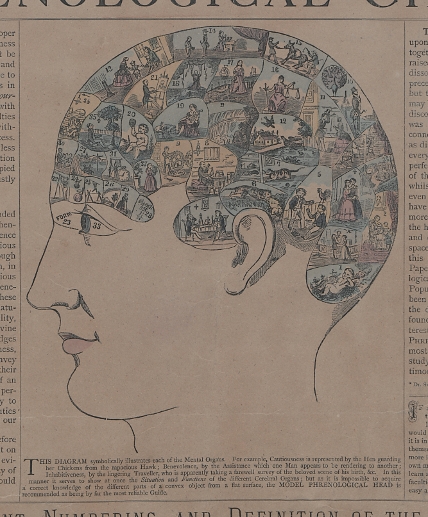 Princeton University Library has recently acquired a substantial collection of material on phrenology. The collection includes about 350 items and was originally assembled in England by a private collector, Denis Gahagan, who was at one time connected with the Sociological Research Unit of the University of London. It documents the rise and decline of this pseudoscience on both sides of the Atlantic, from the early nineteenth century through the mid-twentieth century. Phrenology is based on the (correct) idea of the Austrian doctor Franz Joseph Gall that different areas of the brain control different human behaviors. The earliest book in the collection is his Darstellung der neuen, aus Untersuchungen der Berrichtungen des Gehirns gegrundeten; Theorie dem Physiognomie des Herren Dr. Gall in Wien. Dritte sehr vermehrte Auflage; Mit einem Kupfer (Wein, 1802). Gall was primarily interested in anatomy and physiology, and was dismayed by the way his idea was subsequently popularized by his one-time assistant Johann Spurzheim, who published and lectured in Britain and America from 1815 through 1832. The collection includes Spurzheim’s The physiognomical system of Drs. Gall and Spurzheim; founded on an anatomical and physiological examination of the nervous system in general ... Illustrated with nineteen copperplates. (London: Baldwin, Cradock, & Joy; Edinburgh: William Blackwood, 1815) and many of his published lectures. Spurzheim argued that the skilled phrenologist could assess a person’s intellect and psychology by observing the shape of the skull. It is this idea that gave rise to the many popular handbooks in the collection, and the collection includes multiple editions of the handbooks issued by the Fowlers in America in the nineteenth century. The collection also includes a selection of twentieth-century handbooks for amateur phrenologists, like Vaught's practical character reader (1902), and many completed copies of the Severns’ Phrenological and physiological chart and the O’Dells’ Phrenological chart of character (early twentieth century). In addition to published books, there are journals, including Popular Phrenologist, Phrenological Magazine, Phrenological Journal, and American Phrenological Journal. There are also ephemera – including advertisements, posters and promotional material. Manuscript material is mostly correspondence, starting in the 1970s, and relating to the gathering of this collection, between Gahagan and booksellers, librarians, practicing phrenologists, and other scholars and collectors of phrenology, including Anthony A. Walsh, author of Bibliographia phrenologica. The collection is housed in Princeton University Library’s Department of Rare Books and Special Collections. There is a provisional catalog here (pdf). For further information, contact rbsc@princeton.edu.